Welcome to The Porch, page 1, the Introduction. It starts with some seemingly incongruous lines from a short novel by Joseph Conrad:

“The Nellie, a cruising yawl, swung to her anchor without a flutter of the sails, and was at rest.  The flood had made, the wind was nearly calm, and being bound down the river, the only thing for it was to come to and wait for the turn of the tide.

The sea-reach of the Thames stretched before us like the beginning of an interminable waterway….”

London, England, is on the Thames river. New London, Connecticut, is also on a Thames river, though pronounced the American way. This view of the New London Thames flowing into Long Island Sound was taken a block from my porch.

Isn’t that purty?  If that doesn’t put you in the mood to sit back on a porch, shut-up, and listen to a good story, nothing will. And in “Heart of Darkness”, that’s just what the men reclining on the Nellie did. But more from Marlow and Heart of Darkness in another chapter.

What’s this got to do with porches?  Hey, the deck of a yawl is just another reality for a porch!  (According to Wikepedia a yawl is a two masted sailing craft with an additional mizzenmast located well aft of the main mast.  See, most of us have learned something already!)

So this is the beginning of what could be called, or might even become, “The Porch Dialogues”.   As you are a neighbor,  you are welcome to sit on the Porch with the other neighbors, and listen in.

Start with the I am on The Porch page.  Then follow the dialogues as they come — hopefully often.

A little more from “Heart of Darkness” follows:

“Between us there was, as I have already said somewhere, the bond of the sea (non-Conrad insert follows: “or the bond of the neighborhood or life or humanity or…”). Besides holding our hearts together through long periods of separation, it had the effect of making us tolerant of each other’s yarns — and even convictions…” 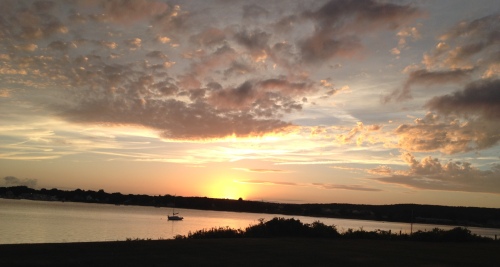 The view from Grandpa’s porch.